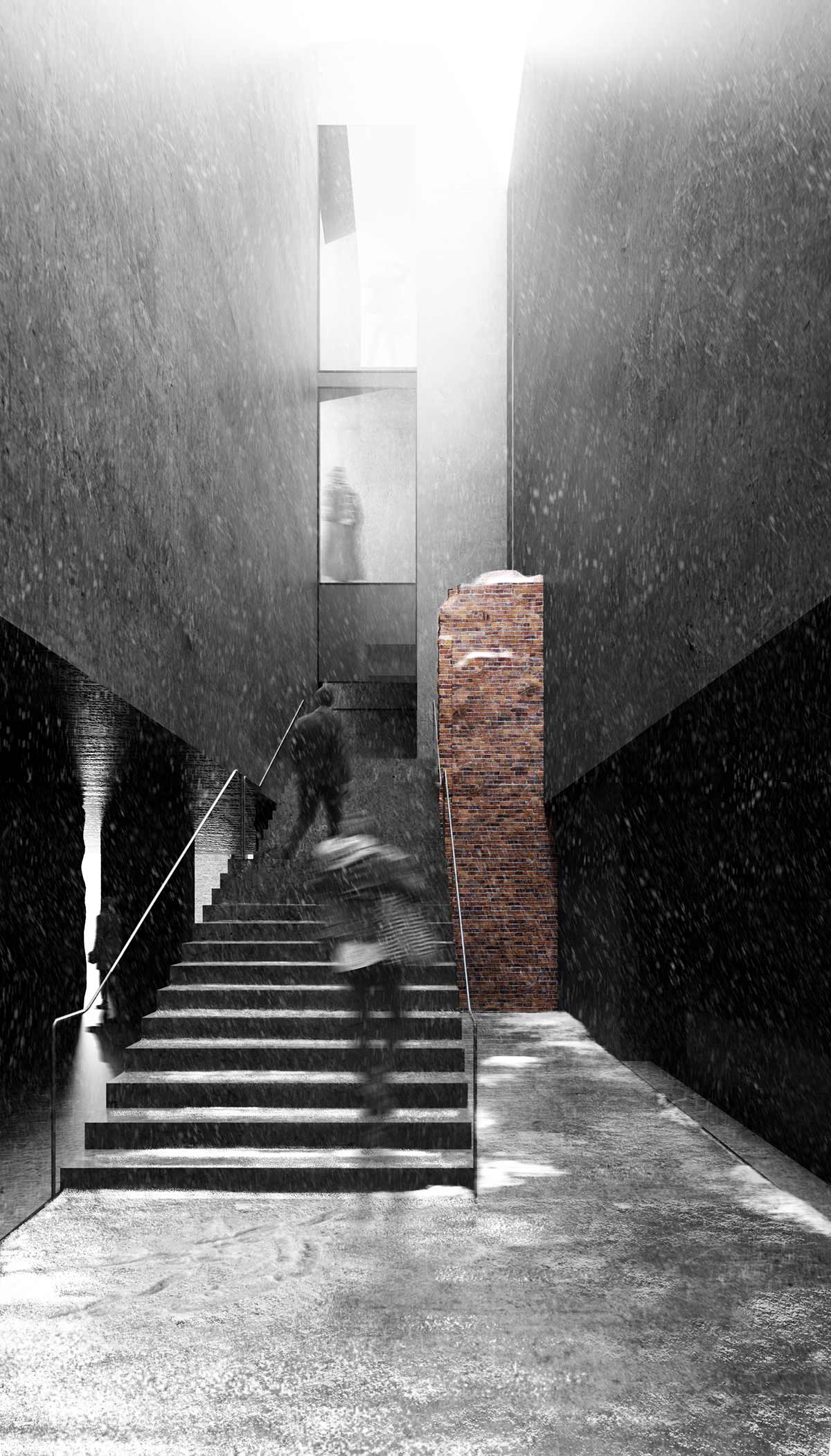 CRESPIN DEPOT THEATRE IN THE PORT OF CALAIS

The project to set up a theatre in the Crespin depot in the port of Calais – a major transit point for people and goods – represented a captivating prospect in such a special place. Special for both its long history and its present importance. Indeed, captivated we were in participating in the construction of a cultural space open to exchanges, to the imaginary and to the infinite range of stage creations…

For a long time, this territory has given me a feeling of melancholic poetry, which I experience during my many journeys to England. While crossing the Hauts-de-France, a region punctuated by conical slag heaps, I have often meditated on the painful efforts deployed over generations to extract from the earth these masses of mining residues that have transformed the relief of this flat country. These artificial hills touch me in their simplicity, and they do project a symbol of emergence and positive verticality that could resonate at the very heart of the architectural act. Changed by the effects of industrialisation, the territory and its geography offer us landscapes made of strong contrasts. 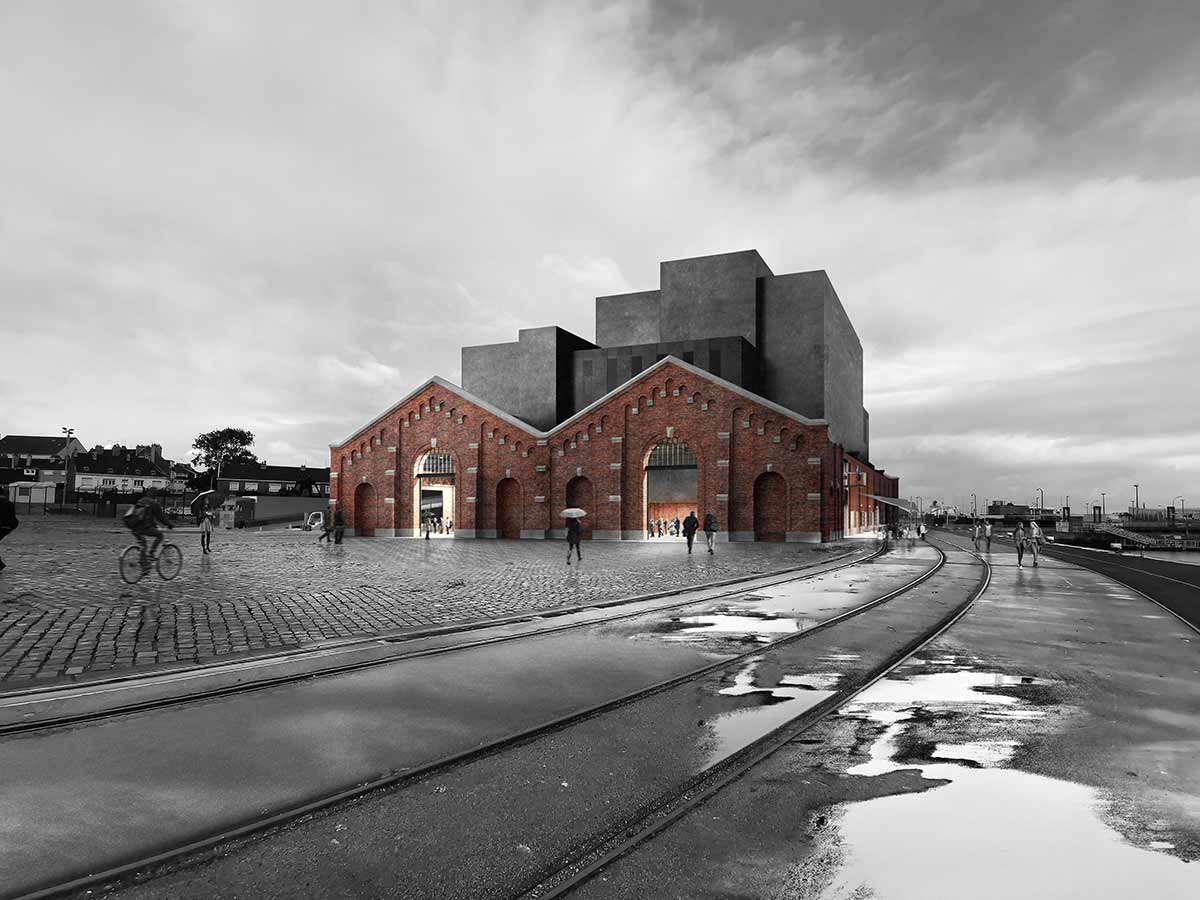 « THE MOVEMENT OF THE VOLUMES IS INTENDED TO BE BOTTO-UP, LIKE A PARALLELEPIPEDAL IRRUPTION.» 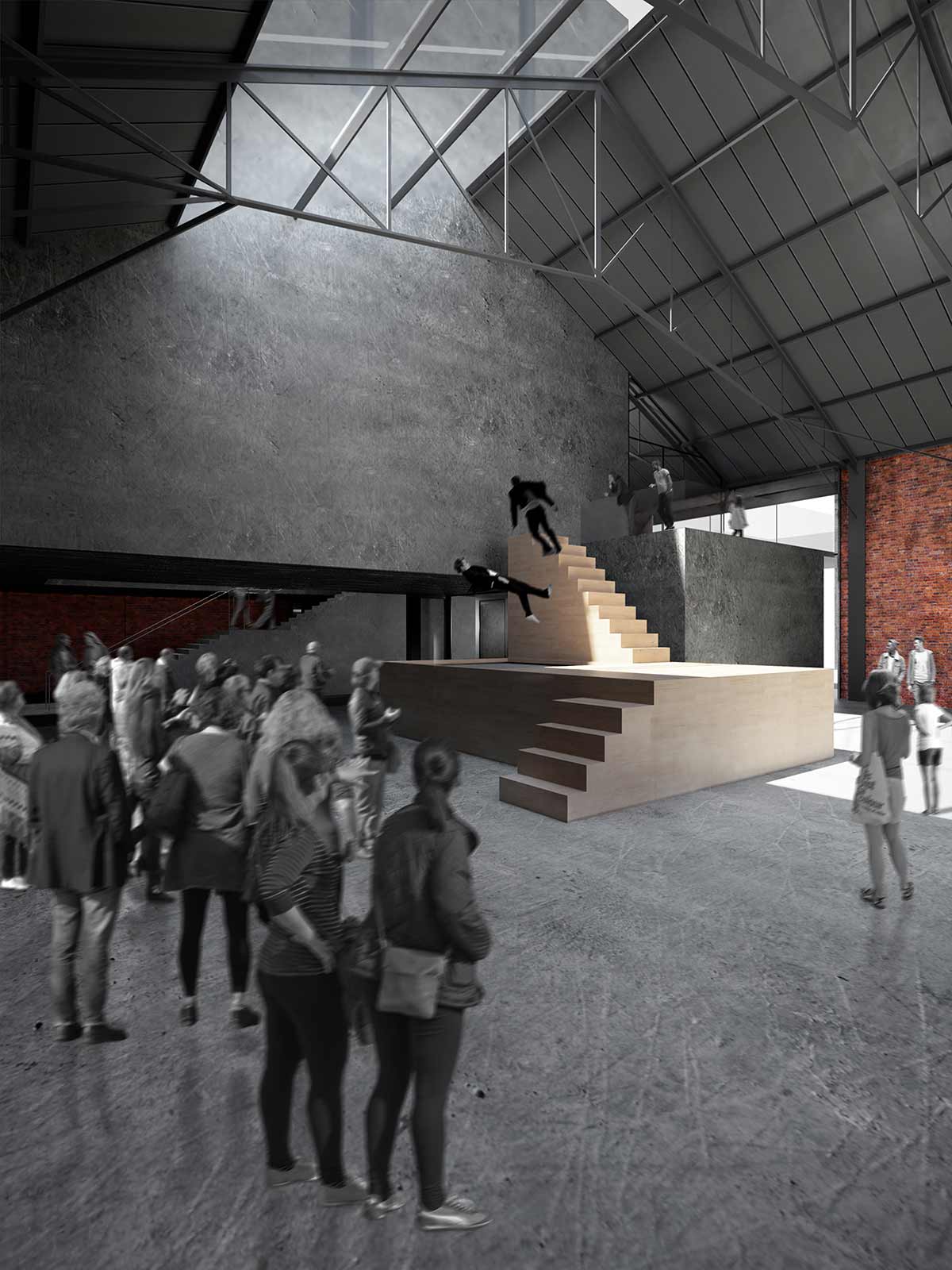 THE IDEAL OF A SPACE OF OPPORTUNITY

There are three interior spaces with imposing volumes and crossings that line the length of the building entice me to create new façades and entrances: I plan one on the water, one on the dock and one on the open side of the manoeuvring area. These three entries and exits act as a powerful sign, guiding a new general organisation. Thus, the three original interior spaces, which one can easily go through, without having to leave, merge and become just one that offers five possible axes of crossing.

The programme suggests that the two large rooms be located on the same level. This choice tends to shrink the reception areas. Bringing many of the functions initially requested on the ground floor, including the two large performance rooms, to a height of more than four metres was an obvious choice when the site was discovered: it offers the opportunity for optimal movement, freeing up some 1,700 sq. meters in a single volume. In addition to this considerable gain in space, this architectural gesture, which deviates from the specifications, allows us to preserve the soul of the place and the patina of time: the floors, the walls and the overall structure within which anything can be imagined – an agora for debate, a skate park, the organisation of balls, concerts, freestyle competitions, etc. 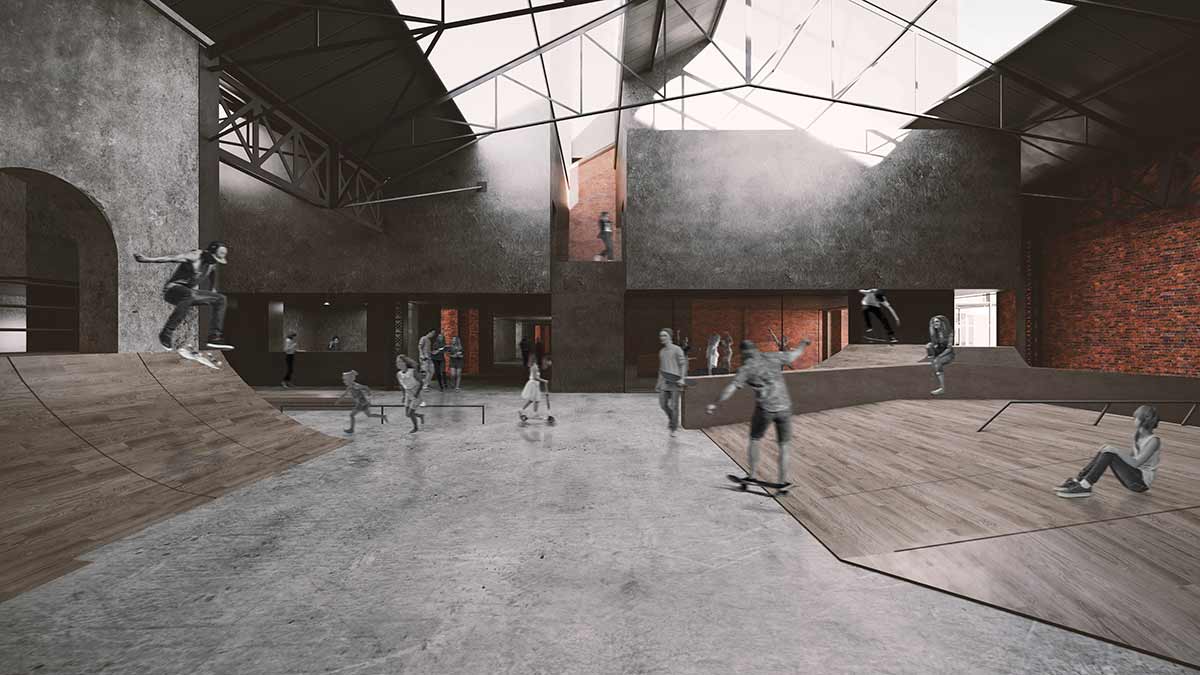 The unique volume of the ground floor allows for having a restaurant, an administration, a writing art residence, a rehearsal room (open to associations), sound and video studios and workshops. Although certain activities can be hidden behind blackout doors, the permeability of views is reinforced on a daily basis: the café-restaurant area merges with the public space through large bay windows, with a view of the basin, and the administration area is also bathed in light. A vast space, therefore, without hierarchy, interchangeable, which gives free rein to informality, creativity, games, speeches, expected and fortuitous events, intergenerational interaction between artists and stagehands, employees and the public… 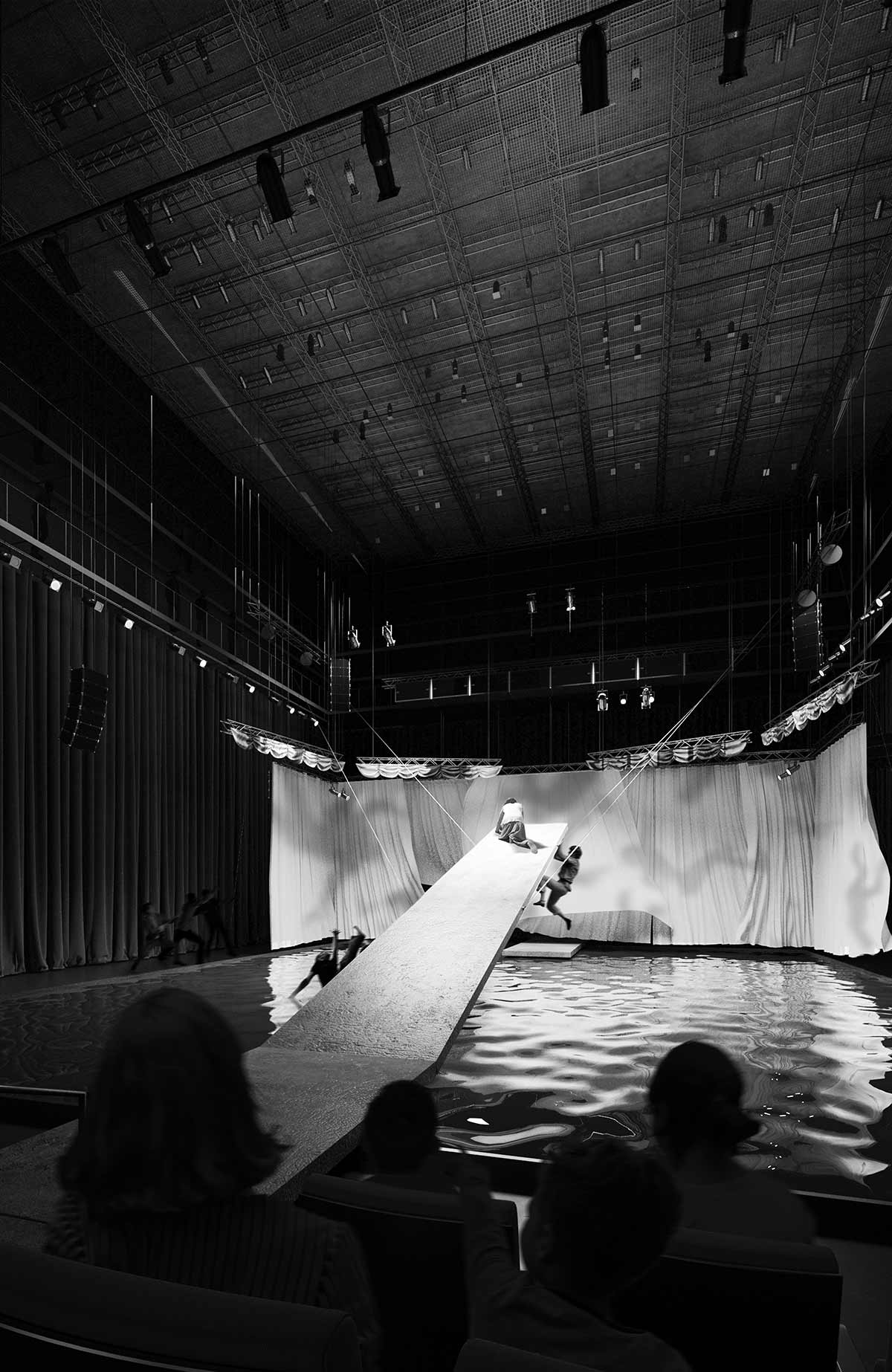 An ideal theatre of opportunities, conviviality and relationships. At the 104 art and culture building in Paris, this type of arrangement has already proved its worth, contributing greatly to its success. It is not possible, in the end, to deploy it to its full potential, as we shall see later; but this initial conception has enabled us to draw a general scheme that will endure in giving the spirit of the place: it is based on the contrasting and yet merging alliance between the old building and the imposing and geometric volume of the concrete. We will soon use and adapt the benefits of this device in other places. 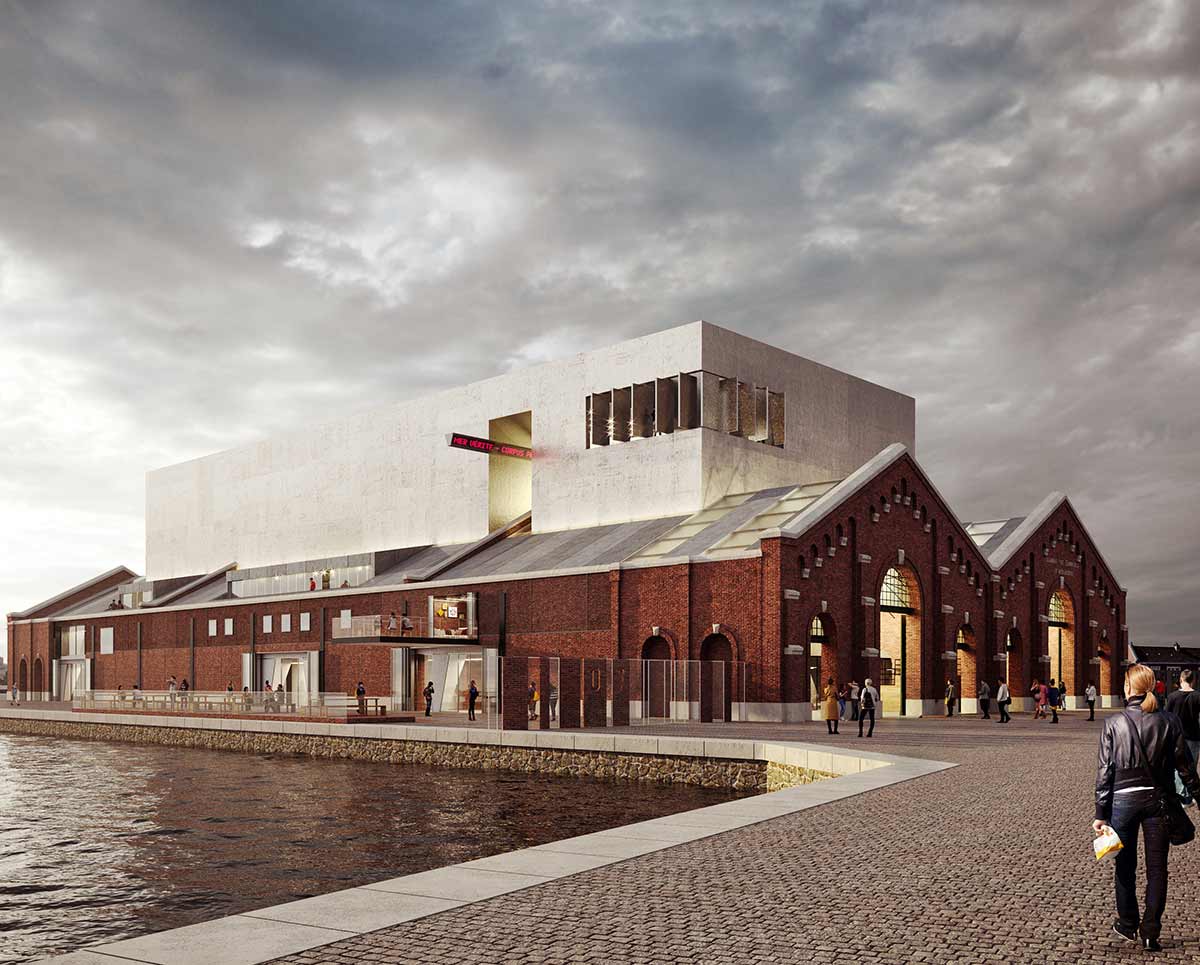 The audience enters at the four cardinal corners, via staircases invaded by zenithal lights, real wells flooding the heart of the installation. We see the creation spaces of the large and small auditoriums as an experimental laboratory. They are black boxes equipped with high-performance scenographic tools, allowing for a wide range of research work: sound, visual and scenographic creations, a real base for elaborate sets. Logistics are ensured by an access ramp leading to the large space. This sizeable layout is readily apparent, like the port environment, which features countless industrial structures. 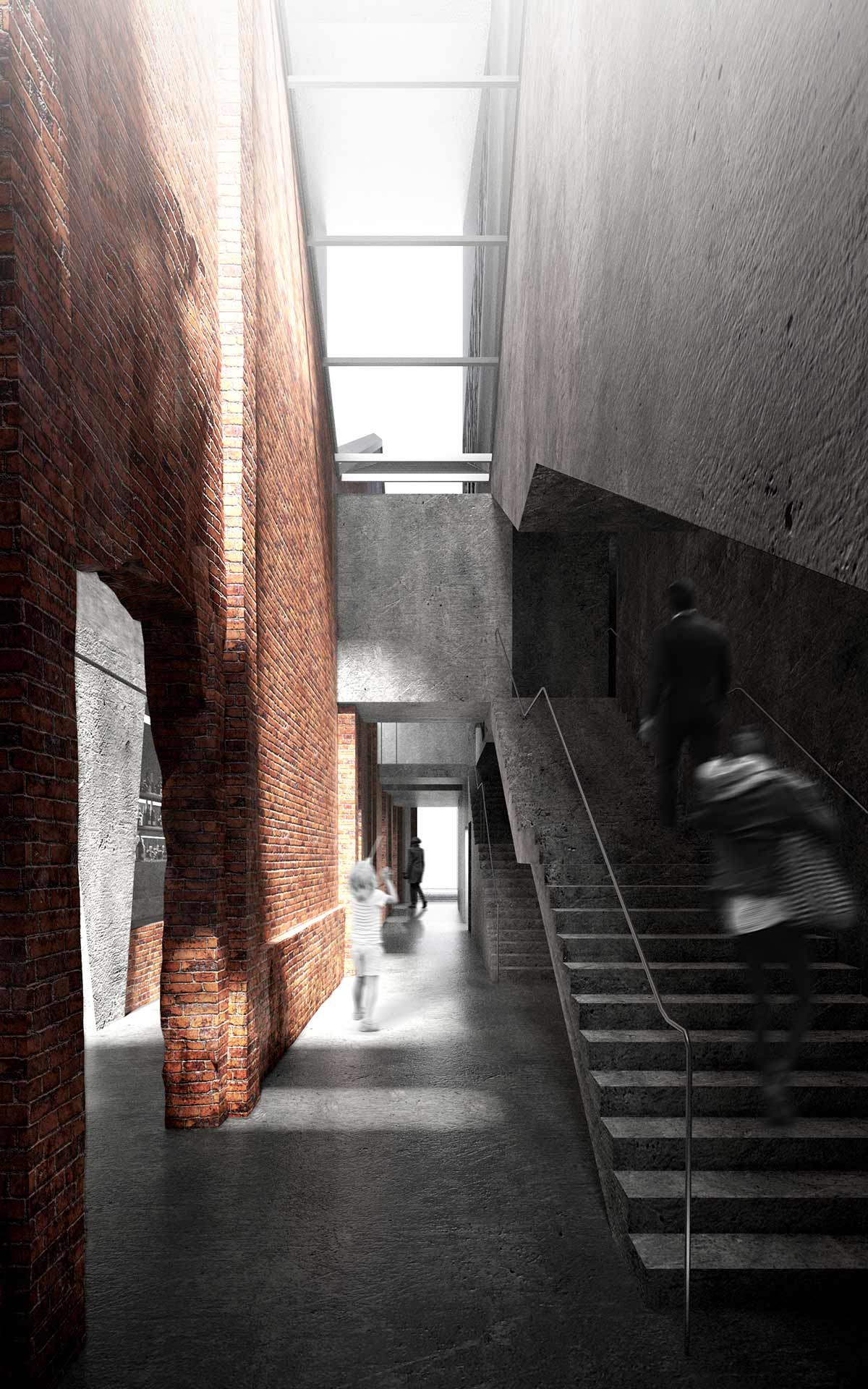 «THE CRESPIN HANGAR COEXISTS WITH THIS CHISELLED BODY, A CATEGORICAL AND ESTABLISHED EXPRESSION OF AN ASSUMED CHANGE OF USE. THUS THE BUILDING IS INVESTED WITHOUT BEING SUBMERGED, DOMINATED OR CRUSHED: IT CONTAINS MORE THAN IT IS CONTAINED, IT CARRIES AND SUPPORTS, ENCOMPASSES AND EMBRACES A HIERATIC BLOCK WITH A MONUMENTAL LIGHTNESS, A UNITARY THEATRE OF ALL POSSIBILITIES. » 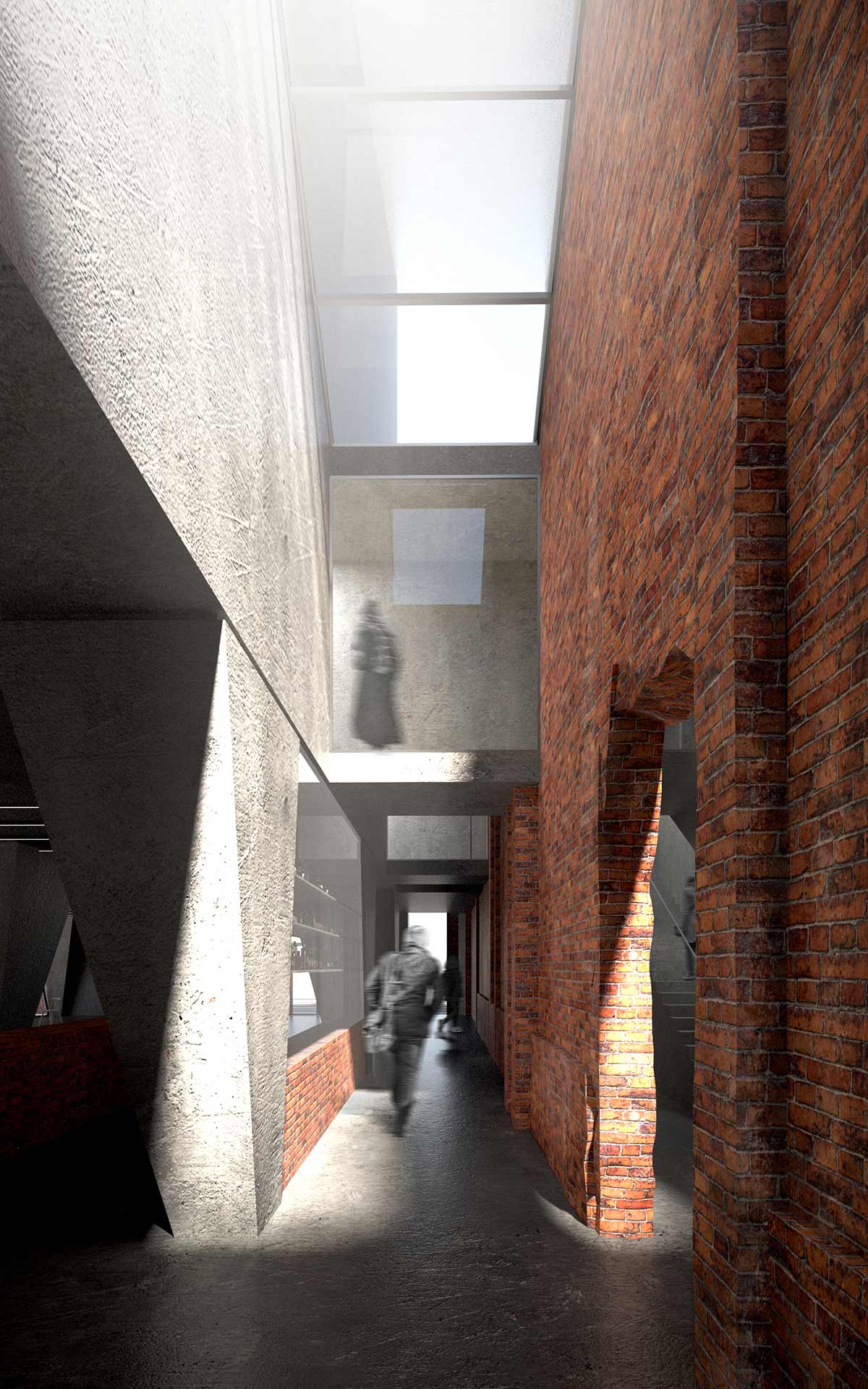 The preservation of the original brick peripheral building, which includes the main and side facades, maintain the identity of the Crespin depot. The roof departures, even on the central parts, are maintained and the enhancement of the gables is quite deliberate. This red brick envelope is magnified, enhanced by a white lace-like ornamentation (Calais is the French city of lace). The front emergences positioned at the centre of the building avoid any alignment on the periphery, and their dark colours form a paradoxically unitary whole. No lateral outgrowth disturbs the perception of the whole, only three discreet openings onto the restaurant and the administration are made. The movement of the volumes is purposefully bottom-up, like a parallelepipedal irruption. The variations shape into the sky, echo with the brickwork, and are fully adapted to the functions contained, and their juxtaposition recalls the unexpected and natural formation of a geometric and modern slag heap.

« THE CONSTRUCTION OF A GEOMETRIC AND MODERN SLAG HEAP. »

The Crespin hangar coexists with this chiselled body, a categorical and established expression of an assumed change of use. Thus the building is invested without being submerged, dominated or crushed: it contains more than it is contained, it carries and supports, encompasses and embraces a hieratic block with a monumental lightness, a unitary theatre of all possibilities. This unitary theatre of all possibilities will keep its central function by anchoring itself to the ground, like a ship that lowers with the lowering of the tide, and comes to rest at the bottom of the hold. 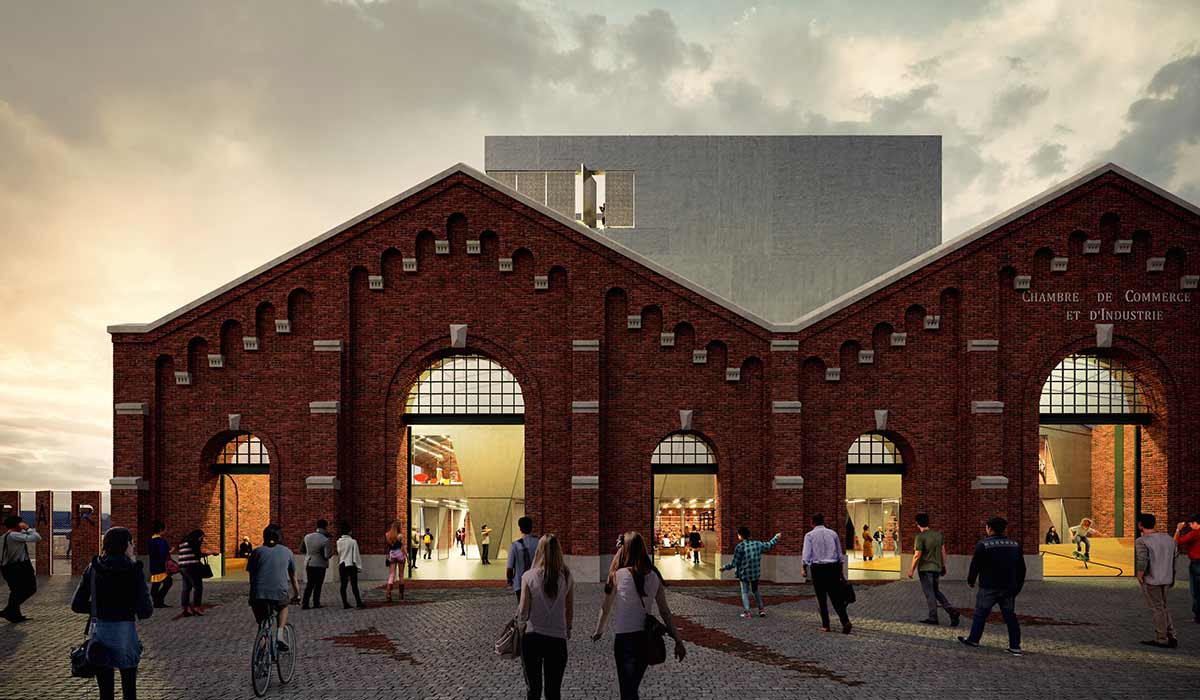 Concrete, a quality architectural material, was chosen here as much for its mechanical capacities and the acoustic comfort it provides, as for its robustness qualities and mechanical resistance to overhangs. The mass and opacity secure the isolation of the bass, and protect against all sound intrusions, both towards the interior of the building and towards the exterior (the activity of the port).

Four large halls will be maintained, in line with each pediment, two to the east and two to the west. A wide gallery will give access to them, along the northern façade overlooking the basin. The existing openings will give rhythm and pleasure to the movements of future users. The metal frameworks will be taken out, refurbished and used as a structure in part for the reconfiguration of the four halls that have been preserved, and as well as for the implementation of a load-bearing structure for the container shelter at the bottom of the plot on the outside. 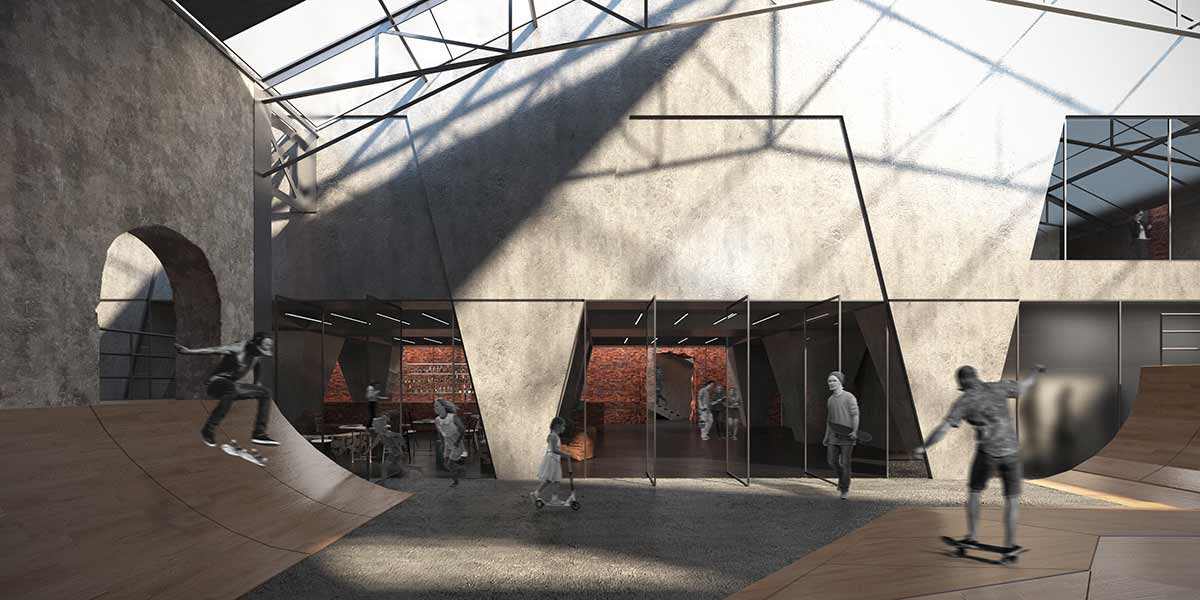 The large production and performance hall cannot remain suspended, according to in-depth studies of the logistics and its functionality. It is therefore lowered by one level and placed at the back of the depot, in the middle, still at a distance from the surrounding walls, while retaining its monumental character. This modification changes the functionalities and the movements of the users, without altering the breadth of spatial orientations designed in the first founding projection. The logistics of the main hall are simplified. Handling is done directly from the outside through two large doors. The two halls on the eastern pediment serve as living, creative and event spaces, accessible to the public while being dedicated to the logistics of the main auditorium. The halls also allow for handling sheltered from bad weather and a protected work space for the technicians in charge of the sets. The fluidity of the artists’ movements is optimised. Accessible from the nearby dressing room, it goes all the way around the main hall. This circulation is repeated on the first floor, distributing the various rooms dedicated to the company’s work: dressing rooms, rehearsal studios, creative studios (writing, sound, video) and the costume workshop. 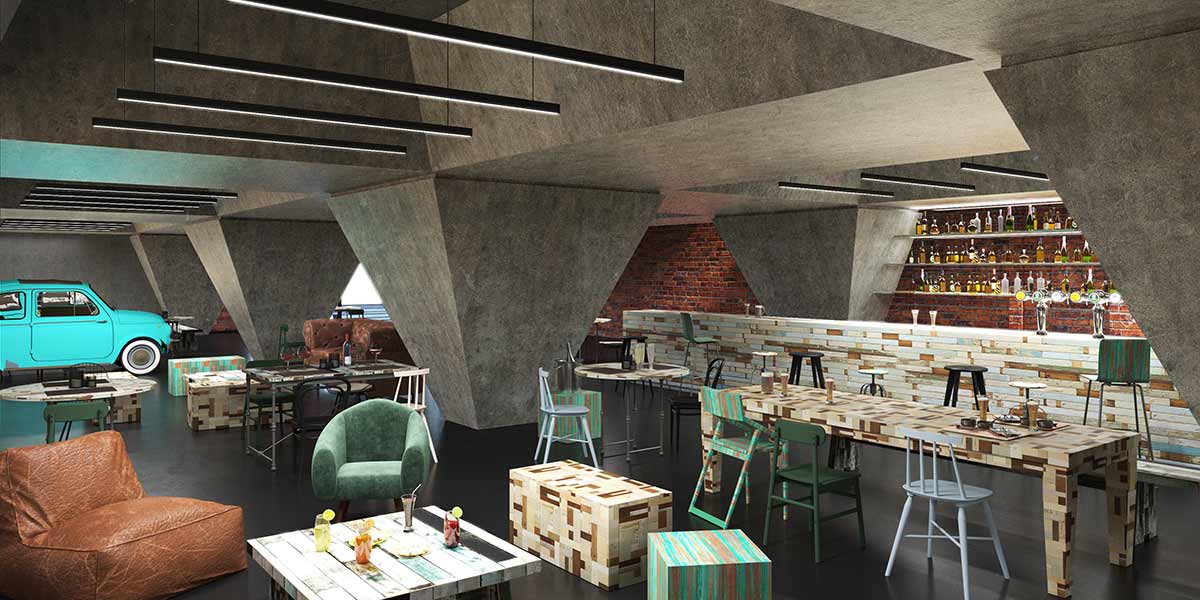 « BUT IN ADDITION TO THIS CONSIDERABLE GAIN IN SPACE, THIS ARCHITECTURAL GESTURE, WHICH DEVIATES FROM THE SPECIFICATIONS, ALLOWS US TO PRESERVE THE SOUL OF THE SITE.» 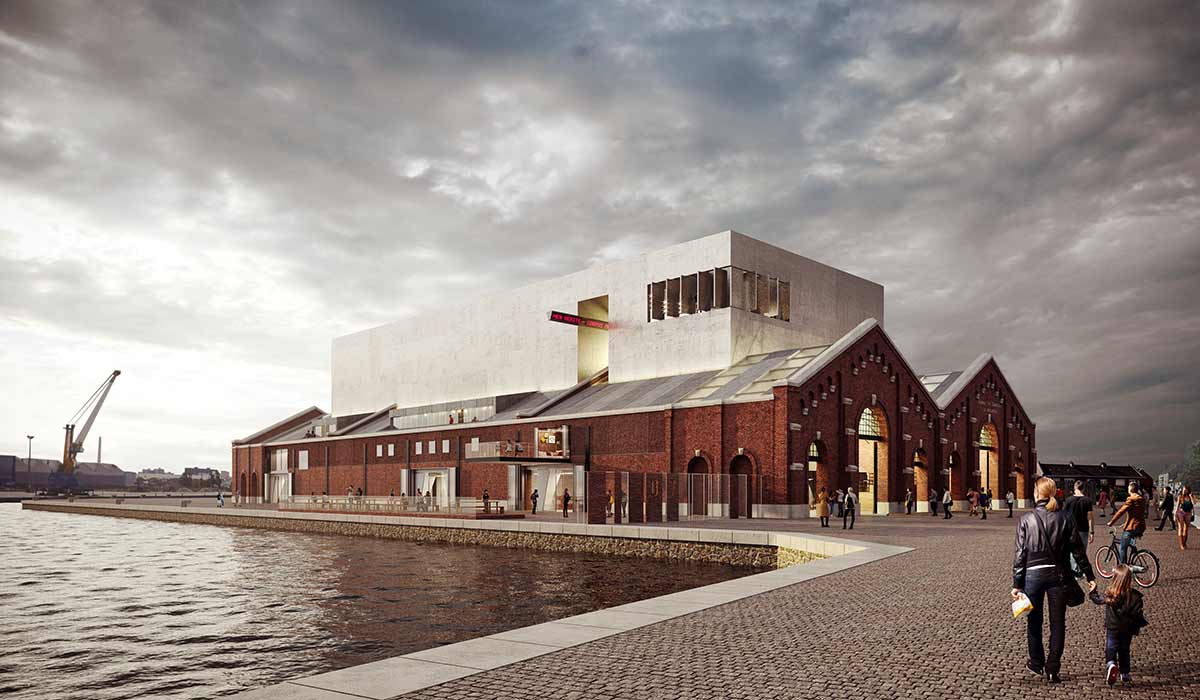 As for the small hall, it is still suspended on the upper level. Below it, a vast space overlooking the western pediments remains free. The bar-restaurant spreads here freely without obstacles, decorated by the sculpted posts of the structure.

Above, one wing is meant for management offices, another for equipment storage. The management offices wing overlooks the pool, with the work spaces opening onto recreational terraces. On the top, accessible level (that of the grill/false grill), there is a writing studio with a large terrace, with an unobstructed view of the basin, the port, the sea opening to England and to the promise of distant voyages and horizons.

The small room is accessible to the public via two straight staircases along the original massive brick wall, under a glass roof bathed in sunlight. Access is through two walkways. Above the latter, a concrete layer is used to conceal the ducts and other technical elements and forms the junction between the two rooms. It creates a void which is used to place a luminous strip, a signpost visible from both inside and outside, as it protrudes from both sides of the building, echoing the inverted idea of a belfry or a lighthouse. The logistics of this room are ensured by a freight lift that opens onto a large platform. It is supplied directly from outside on the delivery area. The room is adjacent to the private foyer, in the immediate vicinity of the studios, dressing rooms, laundry room and other facilities. The life of the troupe is reinforced by the density and proximity of the various production functions. The private foyer, at the junction of the ensemble, becomes the centre of life. On a double height are a large bay towards the entrance below on the west hall, and a terrace in the form of a pier overlooking the basin. The actors can now access the stage from three sides.

Thus, the ground level of the large hall makes it possible to compact the circulations and to provide a project with optimised functioning. In fact, we reduced the surface area, the built mass and the construction cost, while ensuring that the desired spatial and architectural qualities were maintained. 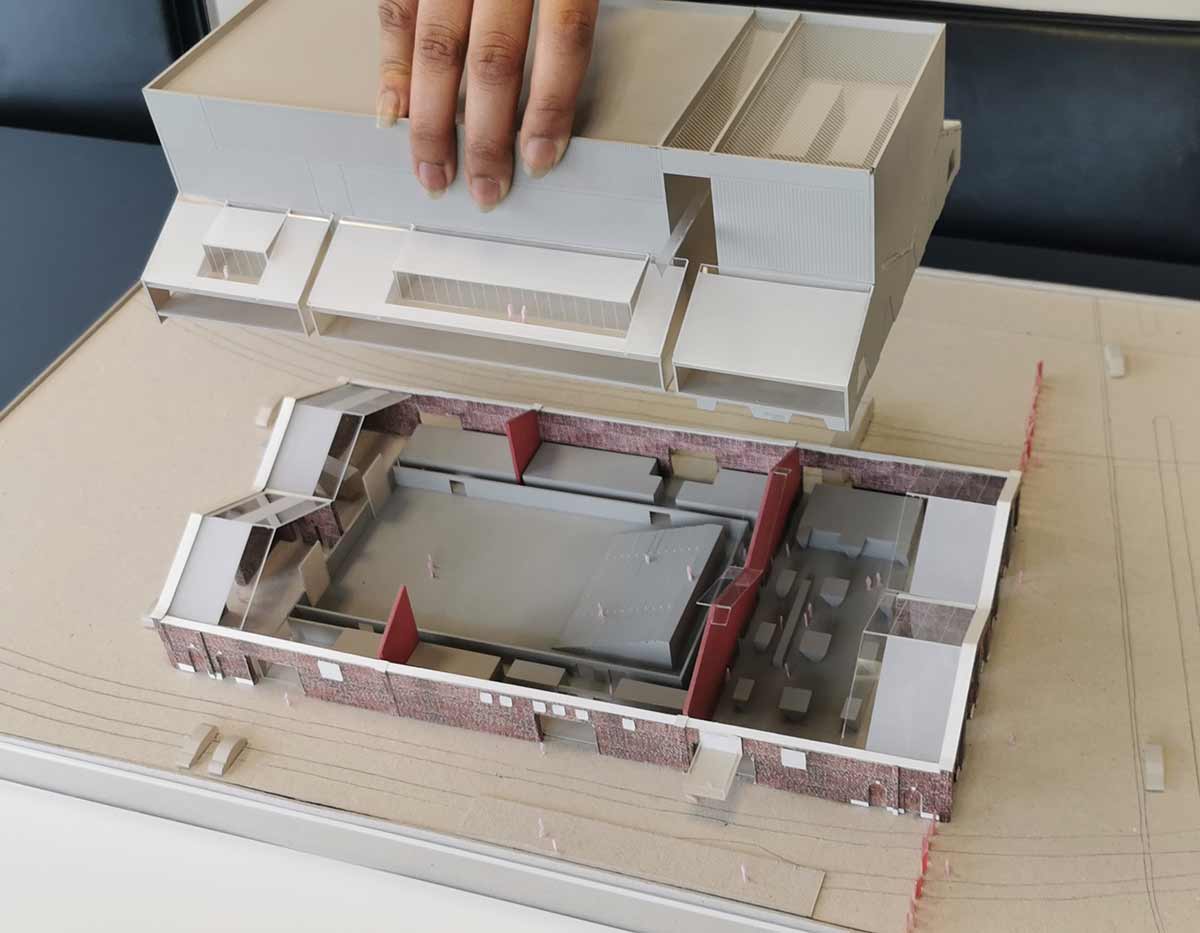 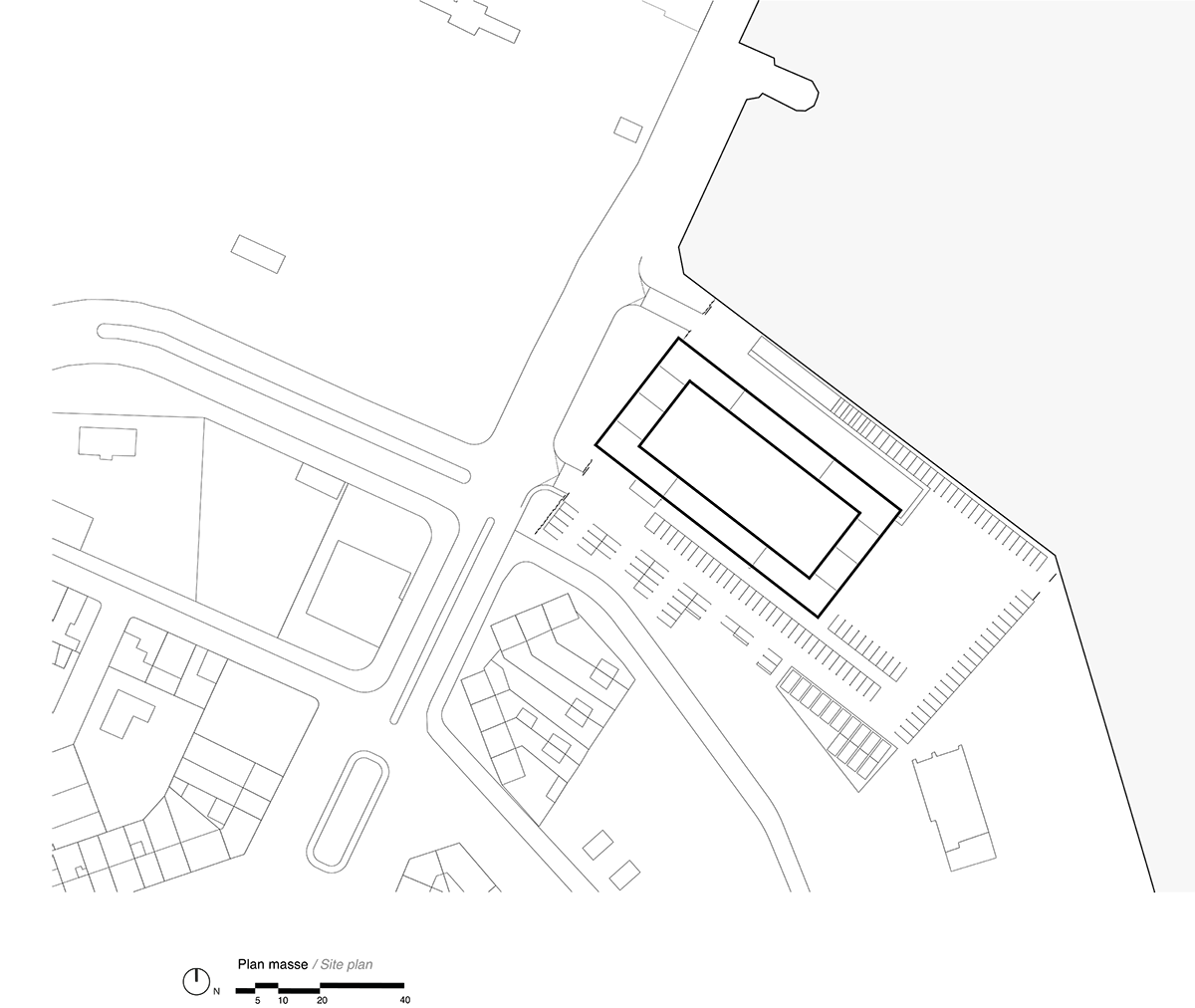 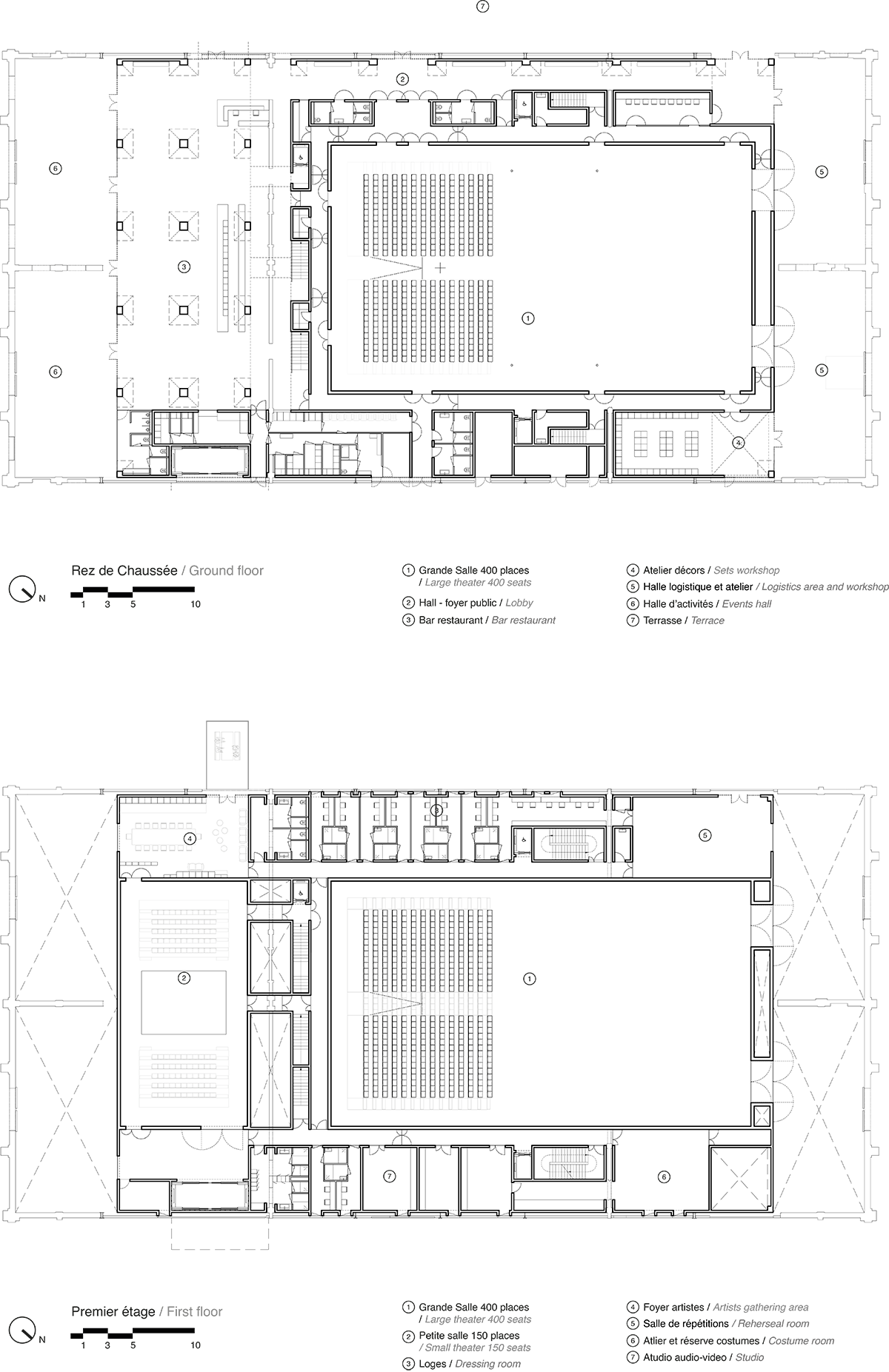 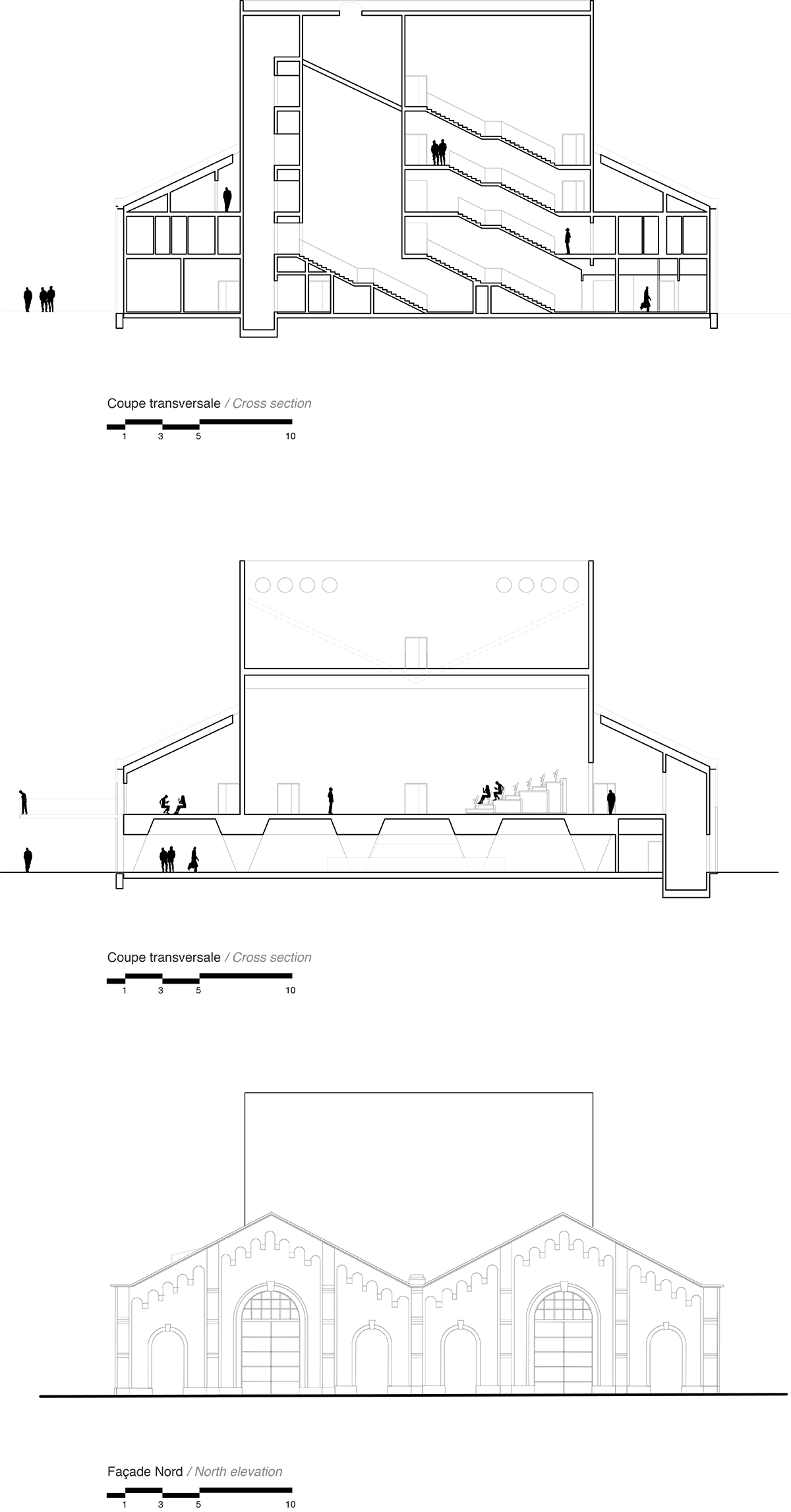